Our mission is to encourage and promote opera in the Greater Dayton area and to support Dayton Opera through fundraising, marketing and education activities. The Opera Guild of Dayton was founded in 1963.

The Guild respects and values unique attributes, characteristics and perspectives of individuals and believes that a diverse membership strengthens its ability to meet and exceed its objectives.

Opera Guild of Dayton was incorporated on November 21, 1963.

IN-KIND donations through time and effort numbered in the thousands of dollars per year during those early years. Guild membership swelled to 500 in 1978. 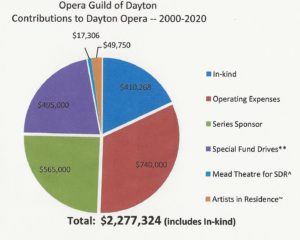 Some Background on The Opera Guild of Dayton

Friend of the Year Award

The Opera Guild of Dayton Friend of the Year is an award that can be given annually by the Guild to an individual, company or institution that has made a significant contribution to the activities of the Guild. These activities may be relative to the educational, promotional or fundraising involvements of the Guild. The award recognizes long-standing and highly significant support.

During the 1986-1987 season the Opera Guild initiated a special award (BRAVO! AWARD) to be given to a Guild member for outstanding service and devotion over a period of time. Winners are announced at the Annual Meeting.